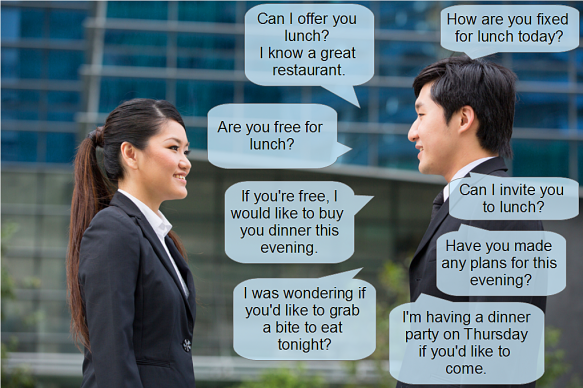 Have you ever been in the difficult situation of having (or trying to have) a conversation with someone who, for whatever reason, just does not want to contribute to the conversation? Perhaps he/she is a little bit shy or maybe they are not confident enough in their use of English, but either way it doesn’t make things any easier and those quiet times when the conversation dries up can be awkward! Well, next time you find yourself in a similar situation, why not try to help things out by incorporating a few useful English phrases? The phrases below are common English phrases that native English speakers often use to help keep a conversation flowing. The phrases don’t need to be used just in awkward situations and are equally suitable to help along a nice discussion with someone such as a friend.

It’s great to be able to have a conversation with someone in English, but sometimes it can be difficult to find a way to end it. You just keep on chatting away, unsure of what you could say to finally end the conversation and not offend the person you are speaking with.

Take a look at the situation below. You have probably experienced it (or something like it) before. The picture that follows it provides you with some common phrases that native English speakers often use to end a conversation.  Maybe next time you find yourself in a similar situation, you could try using some of them!

Situation: You are walking down the street in your city/town and you see an old friend who you have not seen for a while. You approach him/her, engage in conversation and chat about family, work, friends, etc. After a chatting for a little while, you really need to get on with your day, but how do you end the conversation? Take a look at the picture below to find some common expressions to end a discussion (politely) with someone. 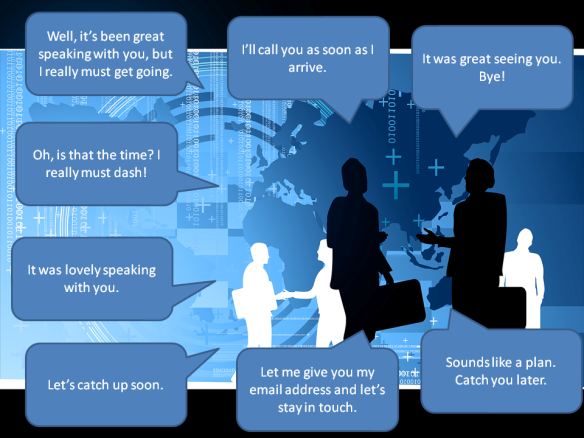 Common phrases to end a discussion.

Are there any other phrases to end a discussion that you can think of? Do you sometimes find it difficult ending a discussion?

This article on dating tips has been written by an author other than me. I have been given permission to publish this article – enjoy!

Exercise: The paragraph in green has been jumbled up. Can you put it back together in the correct order?

I’m going to try to give you some men dating tips that I believe can really help you in your love life. Some of these tips may seem a little off the wall, and not the kind of tips you normally get.

I’m not going to tell you things like “play to his ego” or “laugh at all his jokes” or things like that. Personally, I think that type of thing is very poor advice.

Instead I will provide you with tips that will help you meet a great guy and, hopefully, have a great relationship. But, it will be a relationship of equals, not of a woman catering to a man and losing herself in the process.

So, if that sounds good to you, here we go:

Number the following lines in the correct order:

Instead, be a successful, confidant woman who has lots of interests and lots of friends. A woman who would love a great man to share her life with but doesn’t have to have one just to feel good about herself.

Build your life first and a good man will usually appear!

A confidant man will want a woman who truly appreciates  him, but that doesn’t mean some brainless robot who seems like she is faking her appreciation of his humor or actions.

Be yourself, don’t change to be who you think he wants you to be. If he doesn’t appreciate who you are, then he isn’t the right guy for you.

Really, any successful relationship comes from two mature, self confidant people who are willing to compromise and who know how to explain their feelings in a constructive way. There are no secrets or gimmicks, it’s just about knowing who you are and how to get along with others without losing yourself. These are the best men dating tips I can give you.

There are a series of English grammar PDFs on the Internet that are freely available to everyone, but they can be quite difficult to locate. Over the next three blogs I will be uploading them ten at a time.

I hope you find them useful.